June 10 to 12, 2016, marked the 46th annual LA Gay Pride Parade and Music Festival. As one of the most inclusive festivals and one of the largest gay pride events in the nation, this event took place in the expansive West Hollywood Park. More than 51,000 visitors attended the gathering over the course of three days.

For the music performances, the best views were provided by the cabanas, which offered raised access for unobstructed vision of the main stage. All of the performance stages were raised, which made it easy for revelers to sing and dance along. As usual, the musical performances ran the gamut of all types of genres, with hip hop performances by Kidd Maddony, DJ Morales, Los Horoscopos de Durango and Diana Reyes attracting some of the largest audiences. Some of the other beloved performers to take the stage included the Go Go Dancers in their bikini bottoms and Gia on the main stage. Stage performances also included the transgender rally for equality and the powerful Dyke March and Rally, which really revved up the audience.

As usual, the Saturday afternoon Parade through West Hollywood’s streets was the highlight of the event. The familiar Peace Elephant mural by Shepard Fairey served as the backdrop for couples and groups of friends who wanted to commemorate their participation with a photo. This mural, located at the West Hollywood Library, is as iconic as the parade itself. 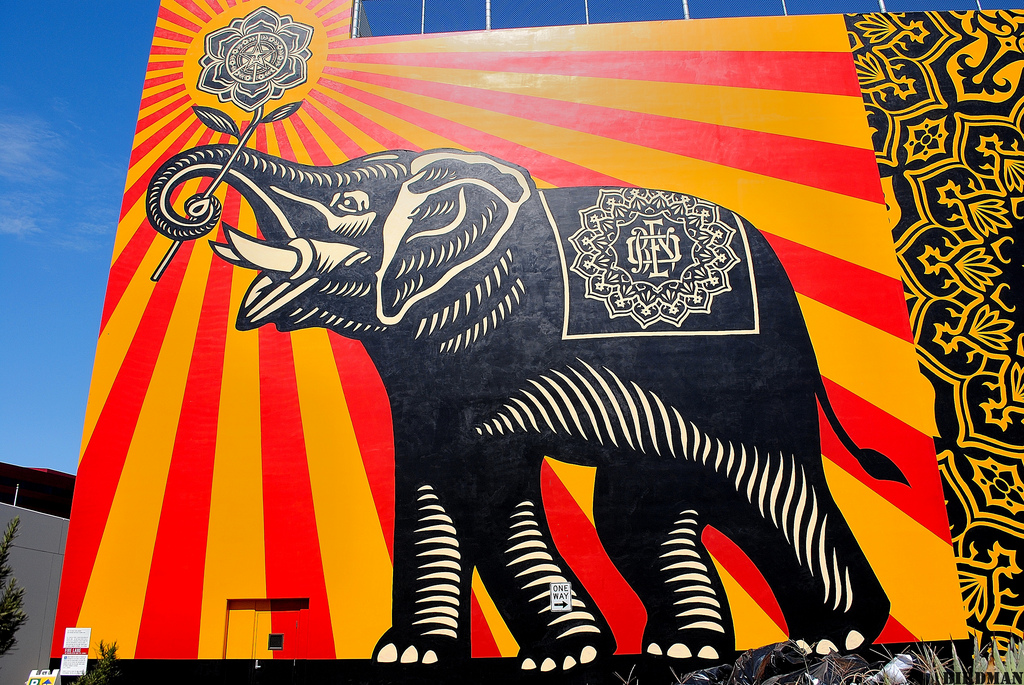 Booths lined the parade route, passing out free condoms, information about HIV and resource links to local agencies that serve the gay community. Interspersed between the colorful booths were food carts and drink stands catering to every appetite. The warm weather meant that the lemonade and shaved ice stands were some of the most popular places for refreshment. Anyone who wanted to see or be seen was sure to be in the crowd or marching in the parade itself.

The mood on Sunday was somber as the details of the Orlando mass shooting spread throughout the community. Even so, people stood together in love, respect and acceptance of all genders, sexualities, ethnicities and races. This show of solidarity was a sight in and of itself. The unity of the LA Gay Pride Parade grew even stronger as straight allies, community leaders and performers stood together and resolved to become a strong force against hate. Each year, the LA Gay Pride Parade and Music Festival gets bigger, better and stronger, and most attendees and performers are already planning their costumes and performances for 2017.