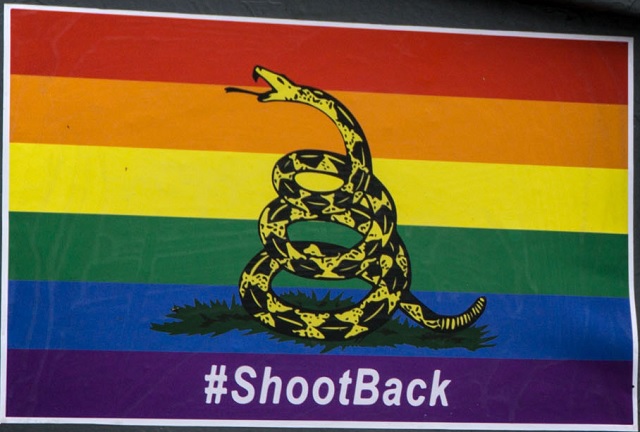 You might not expect the NRA and the LGBT community to be on the same side most of the time, but new posters throughout West Hollywood suggest that this unlikely alliance is real.

Throughout this region of sunny California, rainbow gay pride flags with the revolutionary Gadsden snake can be found everywhere. All of these flags have one simple message on them: “#ShootBack.”

Typically California has been associated with progressive policies, especially anti-gun laws. In the wake of the Orlando terror attack, however, it is quite clear the LGBT community in West Hollywood is signaling a call to arms. No longer does the LGBT community here believe they can rely on lawmakers to protect them with anti-gun legislation. “#Shootback” supporters want the right to defend themselves and to “shoot back” whenever and wherever violence breaks out.

Some famous places these posters have showed up in include by The Abbey, West Hollywood City Hall, and the Pacific Design Center. Also, the famous artist Chad Michael Morrisette put 50 mannequins on the top of his house with many “#Shootback” posters in front of his house. The 50 mannequins represent the 50 innocent people slain in the Orlando massacre. This artist is promoting a proactive response within the gay community to the Orlando shooting.

The “#Shootback” movement can work in Republican Donald Trump’s favor. Unlike his Democratic opponent Hillary Clinton, Donald Trump has been a staunch supporter of guns rights and anti-immigration, two sentiments which many in the gay community have come to support even more so after the attack in Orlando. Many news reports and polls have recently shown gay people moving towards supporting Trump in the upcoming election, which could bode well for a possible Trump presidency.

These “#Shootback” posters clearly show that the LGBT community stands in solidarity with gun rights supporters at this moment. The fact that one of the most liberal parts of the USA is standing up against anti-gun laws shows that Hillary Clinton may have to face an uphill battle getting support from the LGBT community if she continues to promote anti-gun policies.